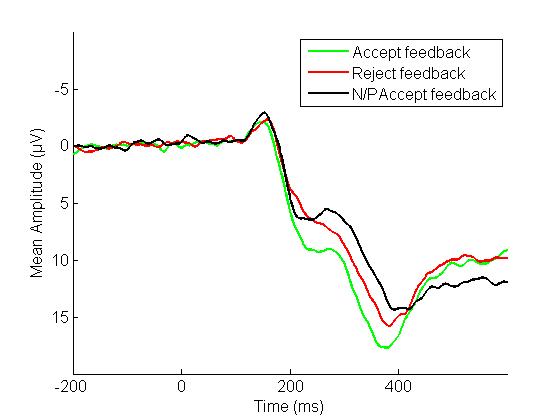 Abnormal social or reward processing is associated with several mental disorders. Although most studies examining reward processing have focused on monetary rewards, recent research also has tested neural reactivity to social rewards (e.g., positive social feedback). However, the majority of these studies only include two feedback valences (e.g., acceptance, rejection). Yet, social evaluation is rarely binary (positive vs. negative) and people often give ‘on the fence’ or neutral evaluations of others. Processing of this type of social feedback may be ambiguous and impacted by factors such as psychopathology, self-esteem, and prior experiences of rejection. Thus, the present study probed the reward positivity (RewP), P300, and late positive potential (LPP) following acceptance, rejection, and “one the fence” [between acceptance and rejection] feedback in undergraduate students (n = 45). Results indicated that the RewP showed more positive amplitudes following acceptance compared to both rejection and “on the fence” feedback, and the RewP was larger (i.e., more positive) following rejection relative to “on the fence” feedback. In contrast, the P300 did not differ between rejection and “on the fence” feedback, and both were reduced compared to acceptance. The LPP was blunted in response to rejection relative to acceptance and “on the fence” feedback (which did not differ from each other). Exploratory analyses demonstrated that greater self-reported rejection sensitivity was associated with a reduced LPP to acceptance. Taken together, these findings suggest that the neural systems underlying the RewP, P300, and LPP may evaluate “on the fence” social feedback differently, and that individuals high on rejection sensitivity may exhibit reduced attention toward and elaborative processing of social acceptance.