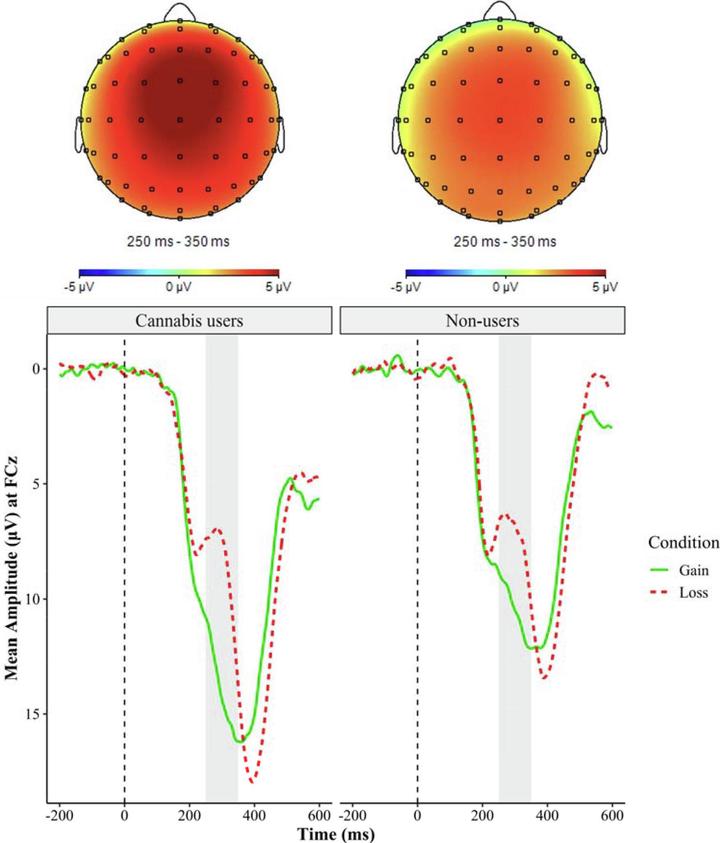 Introduction: Disruptions in neural measures of reward responsiveness are implicated in risk for and the development of Substance Use Disorders (SUDs) in general, but it is not clear if this is also true for Cannabis Use Disorder (CUD). To date, no studies have examined neural reward responsiveness in cannabis users using EEG. Methods: Cannabis users (CU; n = 67) and non-users (n = 60) were drawn from larger studies of individuals with and without internalizing and externalizing psychopathology. Groups were matched on current and lifetime psychopathology. Participants completed a validated monetary reward task during electroencephalogram (EEG). One-way between subject analysis of covariance (ANCOVA) models examined group differences in four EEG indicators of reward responsiveness - the reward positivity (RewP) and feedback negativity (FN) event-related potentials and two time–frequency measures (reward-related delta and loss-related theta). Results: CU demonstrated an enhanced RewP to the attainment of monetary reward compared to non-users (p = .004), even after controlling for relevant covariates. Secondary analyses found that occasional CU, but not current CUD or remitted CUD, showed enhanced RewP compared to non-users. There were no significant differences in FN, reward-related delta, or loss-related theta time–frequency measures between groups. Conclusions: To our knowledge, this is the first study to show preliminary evidence that CU have an enhanced RewP to reward and the extent of disruption may be related to CUD status. Our findings suggest that greater neural reward responsiveness may only be seen among occasional CU, not necessarily among CU with current or remitted CUD.