Depression over time in persons with stroke: A network analysis approach 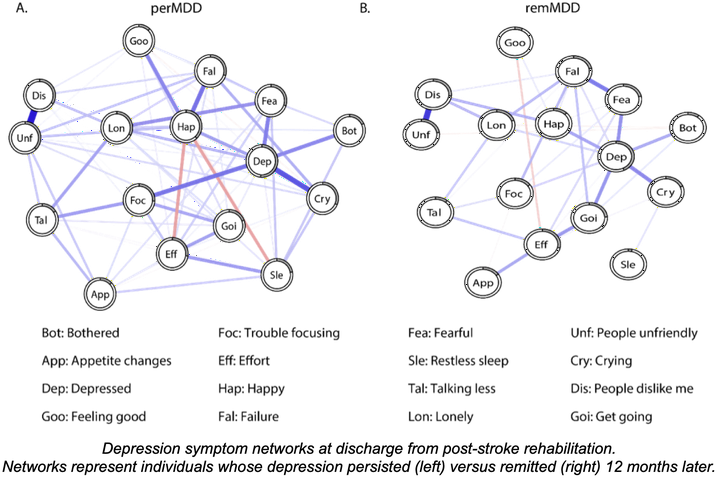 Background: Network analysis has been used to elucidate the relationships among depressive symptoms, but this approach has not been typically used in persons with stroke. Method: Using a sample of 835 persons with stroke from the Stroke Recovery in Underserved Populations 2005-2006 dataset, this study used network analysis to (1) examine changes in relationships between depression symptoms over time, and (2) test whether baseline network characteristics were prognostic for depression persistence. Network analysis was performed on depression symptom collected at discharge, 3-months post-discharge, and 12-months post-discharge. Results: The depression network at discharge was less connected than at both post-discharge follow-ups. Trouble focusing and feeling good as others were the most predictable symptoms at post-discharge, even though they were less connected to other depression symptoms. Among participants with elevated baseline depression severity, those whose depression persisted 12 months later had more strongly connected networks at discharge than those who recovered 12 months later. Limitations: This study was unable to determine the directionality of edges. The depression scale was administered differently across time points. Conclusion: These results suggest that baseline network connectivity can predict the course of post-stroke depression, similar to non-stroke populations. More broadly, the study highlights the importance of examining relationships between individual depressive symptoms rather than only sum-scores.